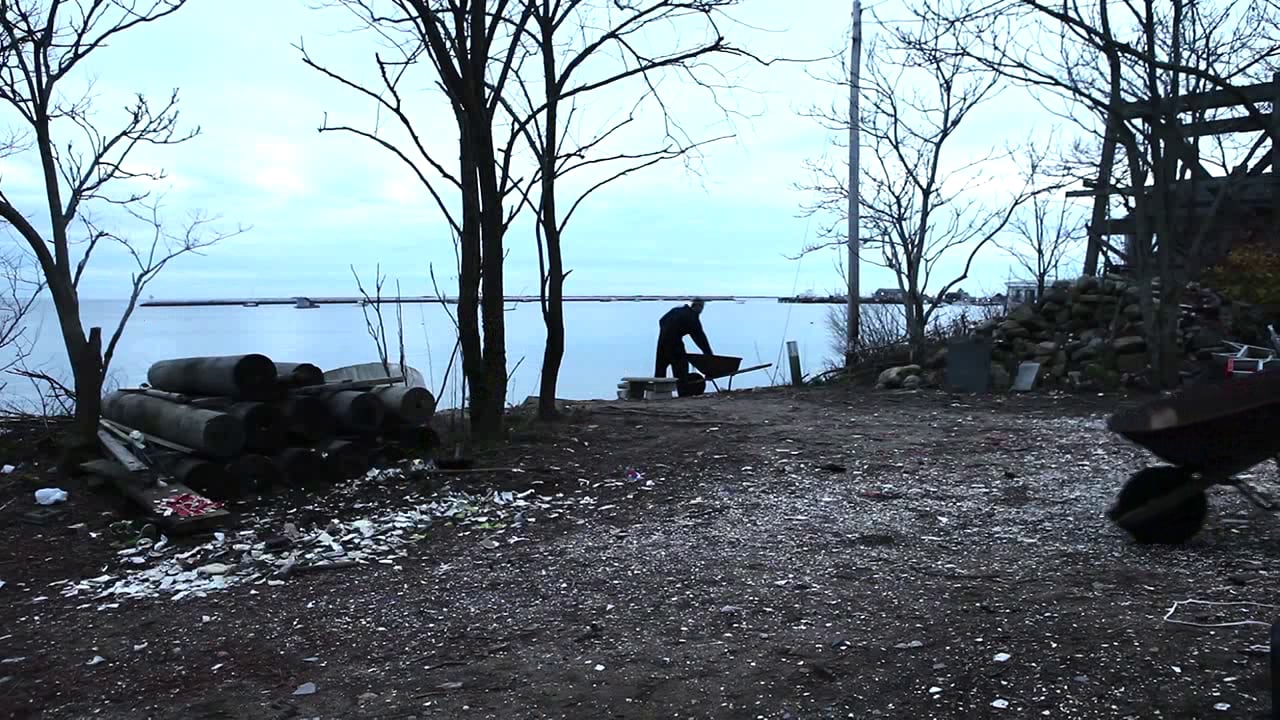 George Bryant collected and smashed plates for years before I arrived on the site of what is now Collect/Disperse. George was an architect, historian and collector of all things. He referred to his collections as his life’s work and had an affinity for books, maps, newspapers and anything related to the seafaring history of Cape Cod. The dishes he collected were an extension of his archived and served the practical purpose to prevent flooding.The architecture produced by the stacks of his local artifacts created a spectacle in the quaint East End of Provincetown.

His logic in assembling this archive ran the fine line between genius and eccentric compulsion. A pile of rusty metal would simultaneously reveal an antique shovel, unused rebar and a whaling harpoon over two hundred years old. The piles of what some referred to as “treasure” obstructed the view of the bay and sometimes spilled onto the street or across the property line.

Under all of these objects were all the years of broken dishes. The shards cascaded out from under the piles in an irreverent white with spots of color and broken words, each individual piece once part of a whole. Even the ground cover of this site was an extension of the archive. George had been collecting and smashing discarded crockery in his yard as a way to grade the land from the street to the sea. It is deepest in the middle, up to a foot thick. One can still see how years of cars driving over large pieces have broken them down to dust in some places.

In 2011, George was compelled to move and could no longer smash the dishes he collected himself; instead, he began throwing them over the fence. I would hear the plates come crashing to the ground in the middle of the night. The piles of dishes grew outside my window along with my anxiety about things slowly reappearing. Out of sheer frustration I put on a pair of coveralls I found in a pile of old clothes and went outside to deal with the dishes. I could not return them to the free store from which they came, or throw them in a dumpster, as they would only reappear. I chose the only working wheel barrow from of a pile of rust and took several cartfuls to a place where I could watch the light and tide change as I broke them down myself.

I knew in the first moment that my hammer hit a stack of plates and they exuberantly shattered in all directions that this was a way for me to mediate the zeal of his drive to collect and my compulsion to clean and discard. This action in its absurdity felt useful. It kept me warm, the way that writers split logs in the winter to find a way to the words. I began to look forward to this movement.

With approval, George would watch me from the street, gesturing with his large hands where he would like the red shards to be placed. He then started leaving me detailed maps about how broken plates with color should be dispersed. Every time I come home to Provincetown I am reassured by how little has changed. When I step out of the car, I stand on the edge of the sea wall, inhale the salt air, take note of the tide and begin to look for the box of dishes and the map that George has left for me.

He no longer stashes piles of whole dishes somewhere to be uncovered by me. On the North East corner of the property there is a large granite stone below the corner of the fence. Almost daily he can be seen tossing curated plates from the basket of his bicycle. The stone is almost entirely covered with colorful broken plates that have been thrown from the street at the fence post. This new location is in the opposite corner of where he originally started tossing bags of plates over the fence for me to break.

I continue to break plates on this site as a way to honor history and rewrite a future. Through this gesture, and with the participation of my community, I hope to hold this piece of Provincetown as a place for artists, wanderers and women. Collect/Disperse is a project where all participants are contributing artists and the physical site is open to visit.

A live performance to break and disperse all of the gifted dishes will takes place twice a year.